Health care is the most important factor for each country on this planet. Many environmental factors affect human health and well-being. Heavy industry, harmful emissions, other types of pollution and inappropriate resources used in various products can have a negative impact on human health. In many countries it is difficult to deal with the negative factor and to find healthier alternatives. To mention all, which are dangerous to human health, is impossible; in this article however, we would like to expose one … asbestos.

Asbestos is a naturally occurring mineral that can be pulled into a fluffy consistency. Asbestos fibres are soft and flexible yet resistant to heat, electricity and corrosion. These qualities make the mineral useful, but they also make asbestos exposure highly toxic. Pure asbestos is an effective insulator, and it can be used in cloth, paper, cement, plastic and other materials to make them stronger. But when someone inhales or ingests asbestos dust, the mineral fibres can become forever trapped in their body. Over decades, trapped asbestos fibres can cause inflammation, scarring and eventually genetic damage to the body’s cells. A rare and aggressive cancer called mesothelioma is almost exclusively caused by asbestos exposure. Asbestos also causes other forms of cancer as well as progressive lung diseases. Microscopic asbestos fibres cannot be seen, smelled or tasted, and it is unsafe to sniff a substance suspected of being asbestos. To detect asbestos, a sample of questionable material must be sent to a lab for testing. 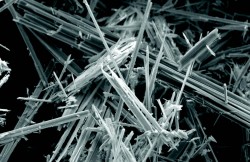 Anthophyllite asbestos under an electronmicroscope. Anthophyllite is one of the six recognised types of asbestos.

Asbestos is banned in most Western nations, including Japan and the countries of the European Union. But the toxic mineral is still commonly used in countries such as Russia, China, India, and Mexico. In the United States, asbestos is not banned, but it is highly regulated. At the end of 2019, the U.S. Environmental Protection Agency is expected to finish its latest risk assessment of asbestos and determine whether to fully ban asbestos products in the United States. Unfortunately, millions of people around the world are still exposed to asbestos from mines, factories and construction sites. Exposure to carcinogenic Asbestos dust from using Asbestos Containing Materials (ACMs) in the forms of insulation, brake liners, gaskets, boiler packings etc is a health hazard at consumer level and to its waste disposal.

Asbestos as a sealing material

Asbestos Fibers were used to manufacture numerous Sealing products such as Compressed Asbestos Fiber (CAF) Gaskets, Valve Gland Packing, Pump Shaft Packing, Boiler Door Packing, Manhole Seals etc collectively known as Asbestos Containing Seals (ACS). These were initially preferred over other materials because of Asbestos thermal characteristics, overall chemical resistance and most importantly, price. However, Asbestos Containing Seals (ACS) were found to be extremely permeable to fugitive emissions and gases. As Emission norms started getting stringent the world over, Asbestos was replaced with superior performing materials such as Graphite, PTFE and Aramid amongst many others. 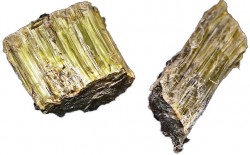 Asbestos from the serpentine group used in industrial and marine gaskets.

The history of asbestos usage goes back to the 1800s but the business of manufacturing asbestos products in India started in 1934. Asbestos, which was considered a “miracle” mineral, started being mined in the states of Rajasthan, Karnataka, Jharkhand, Andhra Pradesh and Odisha. In 1986, the government restricted the expansion of existing asbestos mines in indicating health impacts. In 1993, mining of asbestos was banned by restricting permission for any fresh grant or for renewal of mining lease.

In October 2015, based on a statement made by the Rajasthan and Jharkhand governments, the National Green Tribunal passed an order in the matter of Environics Trust versus Union of India and Others that all the asbestos mines must be closed down and sealed. Despite the ban on mining, asbestos continues to be imported in large quantities. India’s asbestos requirement is met primarily through imports (>90%) from Russia, Kazakhstan, Brazil and China. In 2015, India imported over 370,000 tonnes of asbestos, with the trade value totalling over $239 million, highlighting the impact it has on India’s sensitive foreign exchange reserves and Import dependency. However, Asbestos is slowly being recognized as a health hazard and the cause of various diseases and cancers. But some steps forward have already been done in India. In 2009, the Kerala State Human Rights Commission recommended that the state government replace roofs of government school buildings, ensure that private schools also replace their asbestos roofs and ensure that no new schools are allowed to use asbestos roofs. India has already reached many goals but their fight against asbestos has not ended yet.